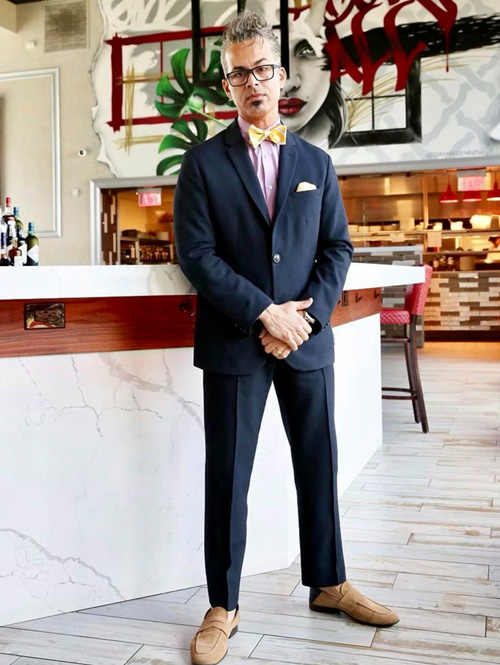 This Brooklyn-born, Bronx-bred native has an affinity for design and creativity, which led to his education at New York’s Fashion Institute of Technology (FIT) in his teens. However, his career truly began in the entertainment industry.

An award-winning musician & songwriter, Angel, began working early on with Grammy award-winning production duo Clivilles & Cole, the masterminds behind C+C Music Factory. Angel had been part of a music group, Trilogy, that C+C would groom and mentor for the music industry; there, he would learn about music production and songwriting. The group embarked on numerous international tours throughout Europe, Southeast Asia, Brazil, and the United States.

This experience also allowed Angel to work on numerous film soundtracks; on one momentous occasion, granted the opportunity to co-write music for The Simpsons.

Wanting to create more in the industry, Angel co-created a television show that he pitched to a former executive he had known in the music industry. The show, Mi Gente/My People, was a talk variety show in English that promoted positive images of Latinos in the worlds of film, music, and sports; It aired in syndication nationally and locally on NBC Channel 4 in New York City. Some memorable guests of the show include Jennifer Lopez, Marc Anthony, and Yankee great Mariano Rivera. Additionally, the show highlighted local stories about local heroes that he felt needed to be celebrated. The show was positively received by the community, making Angel and his production team pioneers in the advancement of Latino culture.

After the show’s production, Angel caught the attention of award-winning music house “Face the Music,” where he worked on music and sound design for Ad agencies associated with Toyota, Scion, Gatorade, Folgers, Mercedes Benz, and Sprite, to name a few. He would aid in creating over 350 commercials for “Face the Music” in both general and Latino markets.

During his tenure with the music house, Angel joined the management team for superstar singer Marc Anthony, where he served as Director of Special Projects. One assignment while working with Marc included research into a possible investment in a restaurant endeavor. New to the industry, Angel sought to learn more about restaurant operations, and he was provided guidance by a mutual associate of Marc’s. The associate explained, “I can teach you the business, but you have something special: you understand people and seem to follow you wherever you go. Now that’s something I can’t teach.”

This relationship allowed for Angel to become the floor manager of such New York gems like East Village favorite “Cuba,” and the Lower East Side’s award-winning “Yerba Buena.” In particular, Yerba Buena was under the culinary direction of Chef Julian Medina. If there is one thing that Angel has come to understand throughout the years, it is that music, art, film, & food all go hand-in-hand: they are the results of a collaborative process.

Angel believes in continually learning and understanding how to connect with the things that matter most: the people. He continues to be passionate about cultivating the experience that the “VENTANAS” team provides to each guest.